The amazing thing about the Gulag is the adrenaline rush you get when you win and return to the game. While my teammates were pinned down in the firefight that led to my demise, I won a second chance at life and helped win a battle that was never in their favor. In the unfortunate event that more than one member of your team is wiped, you’re allowed to spectate your teammate during their duel from a gallery above the bathroom, calling out the whereabouts of their opponent and throwing rocks at them to stun them. If everyone loses, it’s back to the lobby. There are fine margins between success and failure.

Warzone sticks to the basic battle royale concepts, giving you time to explore each new area before restricting the zone and bringing players together in closer proximity. If you do find yourself outside of the zone, you will notice how quickly it can claim you. I’ve often found myself locked in a battle with rival players way outside the next zone and succumbed to the poisonous gas as I attempted to find safety. Gas Masks are a thing, but they only provide short-term relief from the encroaching cloud.

To ease this, Warzone provides a decent array of mobility options. The majority of players will be able to outrun the circle, but Warzone also lets you deploy your parachute from up high, providing quick escapes when on a rooftop. There are also five types of vehicles located all over the map: the two-seater ATV, four-seater Tatical Rover and SUV, a Cargo Truck and a Helicopter. Some are faster than others and they provide varying degrees of protection, but they can help you escape that gas cloud when in a pinch.

Given that the game is less than 24 hours old, it’ll take players a little while to work out the meta — the desired play style and weapon loadout — needed to consistently win battle royale matches. But already, seasoned Call of Duty players are utilizing the expertise gained in Modern Warfare to smack down their opponents — watch out for proximity mines and the clever use of explosive C4 around corners.

The fact you can play with your friends across PlayStation 4, Xbox One and PC is a godsend. Fortnite was obviously the first battle royale game to introduce mixed-platform lobbies (you can choose to limit lobbies by platform), but for Infinity Ward to offer it day one when Respawn/EA still haven’t confirmed the same for Apex Legends, makes finding a workable trio all that much easier.

With all of these new elements, Warzone definitely offers something unique. However, there are a few mechanics that could use some work. One of the most perplexing choices is the kill system, which rewards not the person who knocked a rival player down, but the person that finishes them. This can partly be explained thanks to the existence of self-revive kits, but if someone has successfully reduced an enemy from full health to zero, they should be rewarded with the kill, not a teammate who happens to be nearby.

Some players have even reported that if a downed player leaves before they die, the player won’t get the kill or their loot.

Another minor inconvenience is the squad leader selection. There’s absolutely no point in nominating a leader when each player has to jump individually. Apex employs a grouped system where trios — Warzone’s only game mode right now — are linked to each other until they choose not to be. In its current state, Warzone puts players in a sort of middle ground that doesn’t especially work for most teams — especially when not everyone is in voice chat.

Even Gulag has its weaknesses. While you’re waiting for your one-versus-one, you’ll be waiting in the gallery above the shower room arena with a handful of other players. If you just stand there and wait for your turn to load, other players can throw stones and punch you while you do. It doesn’t impact your fight in terms of health, but it’s just so noisy. There should be an option to either turn off hitmarkers or stop the violence from making any sound. 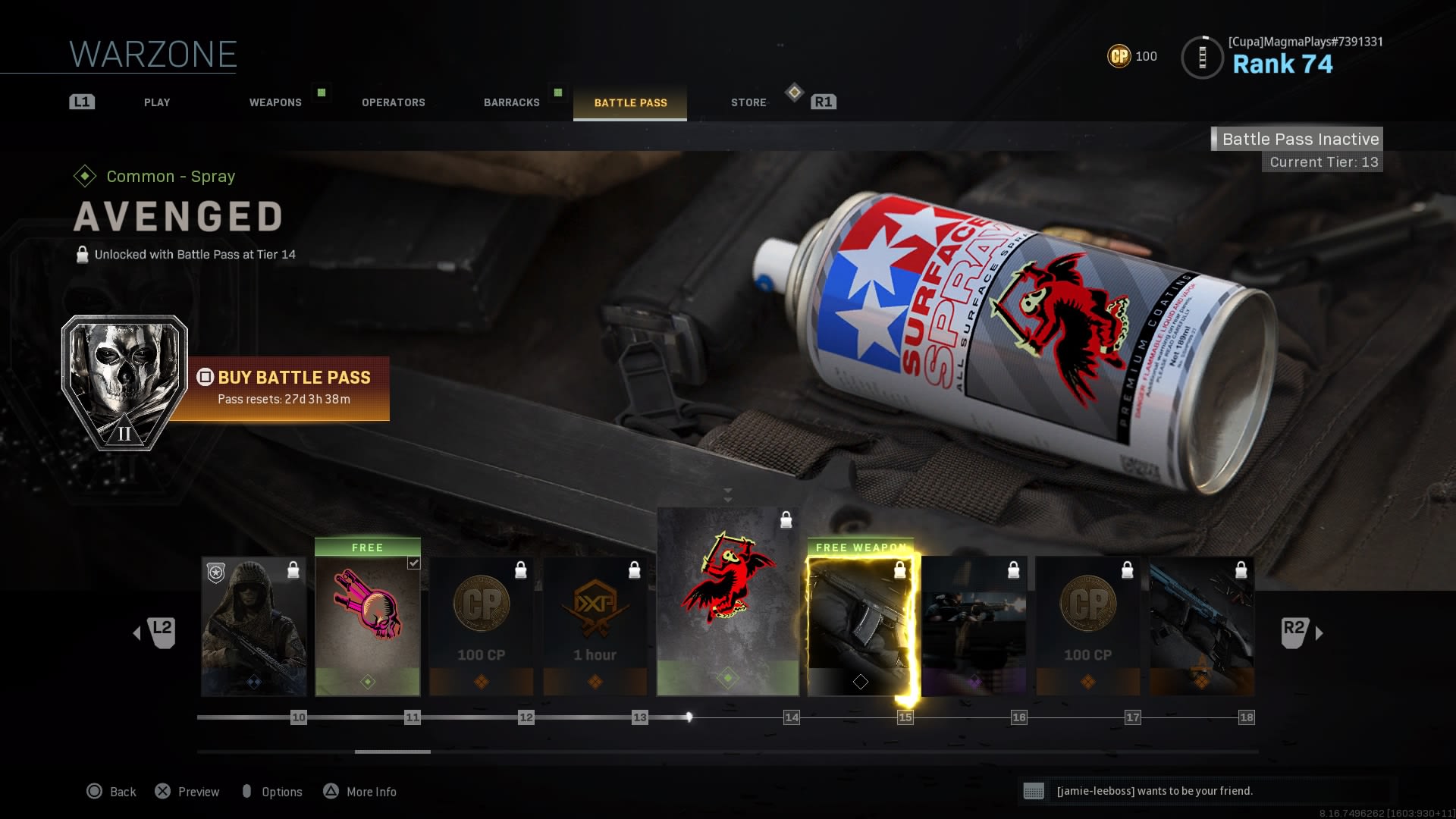 When all is said and done, Warzone is a free game in public beta. You have to expect that there are going to be some kinks that need working out. Movement is slick, gun play is exactly what you’d expect from a Call of Duty game, looting an enemy requires far fewer interactions than in other battle royale shooters. It directly addresses nearly all of the issues people had with Blackout and even copies one of the best in-game ping systems from Apex (Fortnite did too).

Given that everything ties into Modern Warfare, you can expect that many will unlock the standalone game to carry their progress across, but Infinity Ward also offers a Battle Pass system (roughly $10 for a month) for those who just want to pick up things inside the battle royale. As with most Battle Pass systems, Warzone doesn’t incentivize pay-to-win, but instead provides cosmetic items, access to different Operator skins and blueprints for weapons.

Once some of these issues have been worked out, I would expect Solo and Duo playlists to be added, possibly even four-player squads. Then the fun really begins.

All products recommended by Engadget are selected by our editorial team, independent of our parent company. Some of our stories include affiliate links. If you buy something through one of these links, we may earn an affiliate commission.