Glenn Turner, the former New Zealand opener and skipper was a gentleman if ever there was one. During the 1980 Test series between the West Indies and New Zealand, he was disgusted with the boorish behaviour of the tourists, on and off the field. When he batted against them at Worcester in England a few months later, he protested in a bizarre manner: The elegant batsman cross-batted every ball, scoring 45 runs off 24 deliveries, and then deliberately sat on his wicket. “I did that to show my contempt for cricketers who cannot behave in public,” Turner said later.

Lionel Lord Tennyson, former England skipper and grandson of the great poet, wrote Sticky Wickets in 1950, a year before he passed away. In his book he says, “Cricket has more in it than mere efficiency. There is something called the spirit of cricket, which cannot be defined.” The ‘spirit of cricket’ was, however, defined by his successors Ted Dexter and Colin Cowdrey in the 1990s, and is now a part of the preamble to the laws of the game. 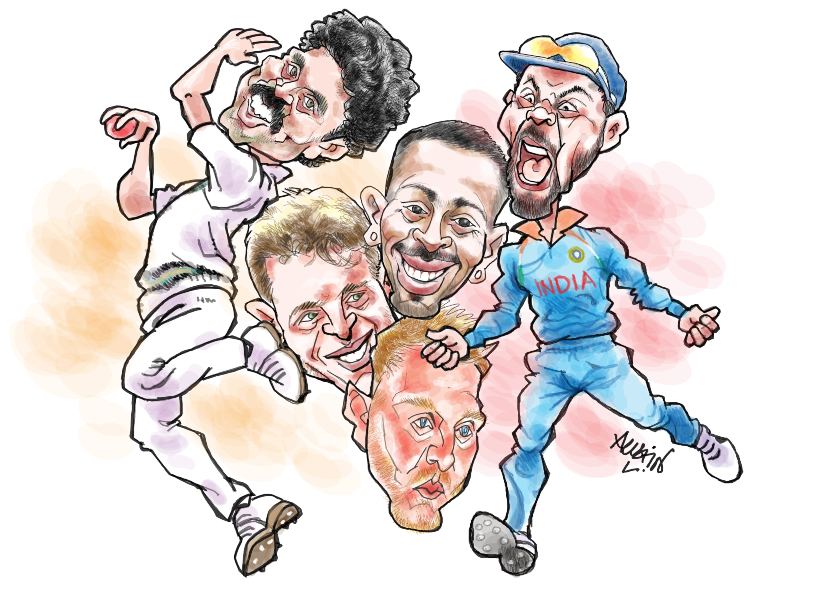 A win-at-all-costs attitude is causing injury to the game. Illustration courtesy Austin Coutinho

The preamble states that cricket is a game that owes much of its unique appeal to the fact that it should be played not only within its laws, but also within the ‘spirit of the game’. Any action which is seen to abuse this ‘spirit’ causes injury to the game itself. It then explains the roles and responsibilities of captains, players and umpires in respecting and upholding the ‘spirit of cricket’.

Neither captains, nor players, nor umpires of the modern era seem to have understood what the spirit of the game of cricket really means.

A win-at-all-costs attitude is causing injury to the game. If the International Cricket Conference (ICC) doesn’t come down heavily on errant captains and players and if it doesn’t ‘punish’ lenient umpiring, the game will soon be known for its hooliganism rather than for its nobility.

Foul language, sledging, excessive appealing, sendoffs to batsmen with a finger showing the way to the dressing room, bowling beamers, questioning the umpires’ decisions, exchanging blows after the match and showing disrespect to each others’ national flags are things that are contrary to the ‘spirit of the game’. Yet, that is what happened in the finals of the ICC Under-19 World Cup last Sunday – a showcase event for youth cricket. That only two Indians and three Bangladeshis were found misbehaving – and thus handed out punishments – after that rather detestable game speaks of how inadequate cricket’s laws are in dealing with ungentlemanly behaviour. The youngsters got away with murder and the two coaches were fortunate to not have received bans for negligence on their part.

The Indians were carrying a legacy forward, having won the crown on four occasions. The Bangladeshis were first-time pretenders to the throne and were that much keener to cause an upset. The latter, a very talented team, however decided to add that extra bit to their effort by being aggressive and implementing a well thought out plan to get under the Indians’ skins. Here’s where the Indian coach failed his boys. If he hadn’t preempted what the Bangladeshis were up to, he should have at least known after the first couple of overs were bowled and re-thought his strategy. What did the Indian boys do? They fell into the trap laid by their opponents, reacted, lost their cool and were eventually vanquished.

Cricket is no longer the gentleman’s game it was in the last century. With the wealth and fame that the game has offered to its top exponents for the last few decades, it was inevitable that ethics, honesty and good manners would soon be tossed out of the window. In recent times, the Ben Stokes controversies, the Joss Buttler-Vernon Philander tiff, sandpaper gate, the sexist remarks by Hardik Pandya and KL Rahul on a television programme, racism, match-fixing scandals and so many other unsavoury incidents have only given cricket a bad name. One doesn’t have to be a lip-reader to find out what Virat Kohli’s favourite word on the cricket field is, and he has millions of young followers!

Just the other day I was watching a clip of the legendary Kapil Dev picking six wickets in a Test match against Australia. After each wicket, he would smile, walk down to the slip cordon area and do the ‘low-fives’ with his teammates; no theatrics, no tantrums. He would then walk back to his bowling mark and refocus on getting his late out-swingers going. Compare this with the histrionics of a Shardul Thakur or a Navdeep Saini after they get the batsman out, slogging, on the long on boundary.

Wasn’t Kapil Dev aggressive? In the early 90s, the great all-rounder partnered Sachin Tendulkar in a double-wicket competition at Wankhede Stadium. One of their opponents was Richard Hadlee, who was at the time considered to be the world’s best all-rounder with Ian Botham, Imran Khan and Kapil Dev following close behind, in that order. I don’t quite remember who partnered Hadlee. After the Indian pair had won easily, Kapil Dev walked into the visitors’ dressing room, where I was seated alone, pumped his arm and using a choice Haryanvi expletive said, “Best all-rounder in the world?” His celebrations were private and gentlemanly, I guess.

Despite being a fast bowler in the 80s, and an aggressive one at that, my celebrations were never over-the-top. When I coached a talented bunch of youngsters in the 90s, it was as much about etiquette as technique, fitness and mind games. When I returned to cricket in 2009-10, after a ten-year break due to career and personal reasons, the change in dressing room culture hit me like a lightning bolt. Boys who weren’t out in the middle were instructed by their coaches to cheer every shot – defensive or attacking – and applaud every ball, even bad ones. To deride the opposition bowlers and fielders, to keep the noise going through the day. It was a new sort of ‘aggression’ I had never seen before.

What was more shocking was the language – full of cusswords – used by the youngsters in conversation, unmindful of who was listening. I knew I was a misfit in that ‘evolved’ crowd of cricket officials, coaches and players, and walked out of it all in a couple of years.

Modern cricketers are a belligerent lot, a lot more like footballers. The ICC can no longer afford to postpone the use of yellow and red cards in international cricket by umpires. The sooner the better!

The author is a caricaturist and sportswriter. A former fast bowler, coach and sports administrator, he believes in calling a spade a spade.

Cancel reply
Games of throne Top New Video Game Releases On Switch, PS4, Xbox One, And PC This Week — January 26 – February 1, 2019
Games of throne What Comes After: Reading Sarah J. Maas’ A Court of Mist and Fury
To Top