Monte Cook’s legendary D&D campaign setting, Ptolus, returns in the form of a new kickstarter for D&D 5th Edition and the Cypher System.

Monte Cook likes to make big books with deluxe editions. One only needs to turn to Numenera or the deluxe behemoth that is Invisible Sun to see this fact for themselves. And back in the halcyon days of 3rd Edition, Monte Cook developed a massive campaign setting full of interacting factions, new races and mythologies, with literally hundreds of pages dedicated to fleshing out this fantasy setting. And now, Ptolus, Monte Cook’s “city by the spire” is back, thanks to Kickstarter. Come and take a look!

Welcome to Ptolus. A city of mysteries, secrets, and dark histories. Ptolus lies forever in the shadow of a towering stone spire reaching impossibly high into the sky, itself an enigma and a reminder of evil long past. And it sits atop a seemingly endless network of ancient dungeons that draw adventurers from all corners of the Empire.

Ptolus is a massive fantasy city setting. The 672-page book (which comes with hundreds of additional pages of handouts and extras) gives you an amazing amount of detail, but is carefully designed and laid out to make everything easy to digest, manage, and access.

Ptolus isn’t just big. It also feels alive. It’s a place you can inhabit—a place with an atmosphere you feel. Many places, actually, because the city itself contains numerous quarters, each of which has its own nature—and that doesn’t include the many underground regions or the spire that looms over the entire city which holds not one but two seemingly unreachable fortresses. The book’s unique presentation doesn’t just make it easy to use, it also imparts flavor to virtually every page—and every district, location, NPC, faction, and mystery.

Ptolus, and the world around it, is dynamic. Three different people lay claim to the Imperial Throne. A myriad of factions pursue their goals, often with secrecy and skullduggery. The Holy Emperor clashes with adherents to a multitude of other faiths. Merchants and cityfolk pursue their day-to-day lives, while delvers continue to unlock the secrets of the recently uncovered vast dungeons beneath the city. Throughout Ptolus, wheels are in motion. But the story is yet to be told, and Ptolus is set up to make it your story. 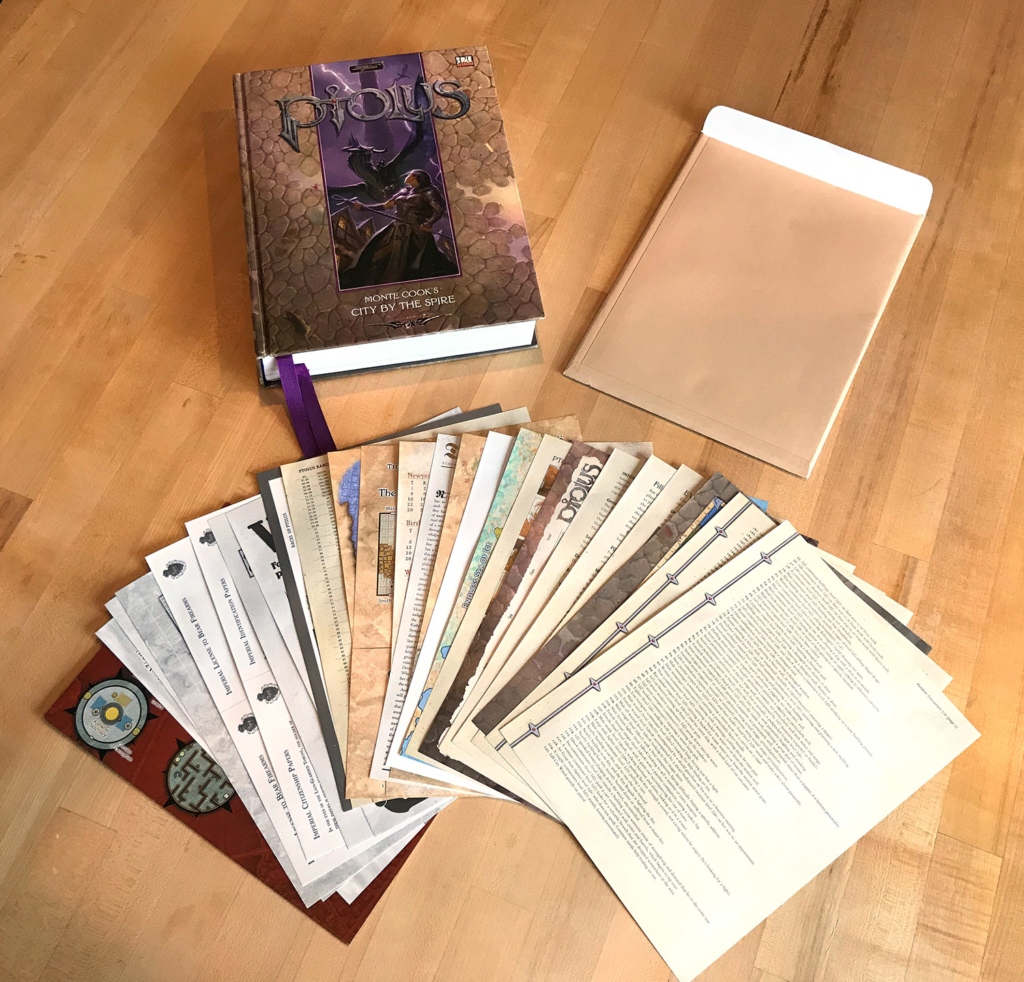 Finally, Ptolus as a setting was built specifically for the world’s most famous fantasy RPG. It’s a world that operates according to the game’s assumptions. Everyone knows that monsters and wizards are not only real, you might see one on your way to the market. The blacksmith down the road might be finishing a harness of full plate armor in addition to the normal tools and horseshoes. Humans strolling down the street rub shoulders with elves, dwarves, halflings, half-orcs, as well as leonine litorians, winged cherubim, and even centaurs and lizardfolk. Laws and traditions dictate when and how magic can be used in commerce, legal affairs, gambling houses, and other everyday transactions. These considerations aren’t tacked on to the setting—they’re baked into its foundations.